Company News
Here is all you want to know industry news and company news，Latest product news , Information about AOK
Use skills and common types of thermally conductive potting encapsulant

With the rapid development of modern electronic communication industry, people pay more and more attention to product stability and user experience, and have higher audit standards for the weather resistance and reliability of electronic products. Therefore, more and more electronic products need Using potting, thermally conductive potting encapsulant can enhance the product's shock resistance, water resistance, and heat dissipation performance. Protect the working environment stability of its products and extend the service life. Has been more and more favored by engineers, the following are common thermal conductive potting encapsulant and selection techniques:

The thermally conductive potting encapsulant is liquid before curing and has fluidity. The viscosity of the encapsulant varies according to the product's performance, material, and production process. Thermally conductive electronic potting encapsulant can only realize its use value after it is fully cured. After curing, it can play the role of waterproof and moisture-proof, heat-conducting, confidentiality, corrosion-proof, dust-proof, insulation, temperature resistance, and shockproof.

Silicone thermally conductive potting encapsulant is a composite material prepared with silicone material as a matrix. It can be cured at room temperature or by heating. The higher the temperature, the faster the curing. It is made by adding thermal conductive material on the basis of ordinary potting silica gel or bonding silica gel. It will not produce any by-products during the curing reaction. It can be applied to materials such as PC (Poly-carbonate), PP, ABS, PVC, and metals. The surface of the class. It is suitable for thermal conductivity, insulation, waterproof and flame retardant of electronic accessories, and its flame retardancy must reach UL94-V0 level. To comply with EU RoHS directive requirements. The main application areas are potting of electronic and electrical components and electrical components, and it is also used for potting of similar temperature sensors.

The most common thermally conductive potting silicone rubber is composed of two components (components A and B), including two types of silicone rubber, addition molding or condensation type. The addition molding can be deep-filled and there is no low molecular substance produced during the curing process. , The shrinkage rate is extremely low, and the adhesion to the component or the wall of the potting cavity is good. The shrinkage of the condensation type is higher and the adhesion to the cavity components is lower.

Epoxy potting encapsulant refers to a type of epoxy resin liquid encapsulation or potting material made with epoxy resin as the main component, various functional additives, and suitable curing agent.

The most common is two-component, there are also single-component heating curing. The main agent and curing agent of the two-component potting encapsulant are separately packaged and stored. Before use, the AB mixing ratio must be carried out according to a specific ratio. After mixing, the potting operation can be carried out, and the quality is better. Vacuum the colloid before defoaming. The two-component curing agent is also divided into medium-high temperature curing type and normal temperature curing type, and there are also special other curing methods.

The main components of the polyurethane encapsulant are multiben diisocyanate and polyether polyol in the presence of a catalyst (triethylene diamine) to cross-link and cure to form a high polymer. The polyurethane encapsulant has good bonding properties, insulation properties and Good weather resistance and hardness can be changed by adjusting the content of diisocyanate and polyether polyol, which can be applied to the packaging of various electronic and electrical equipment.

The difference between polyurethane, silicone and epoxy resin potting encapsulant 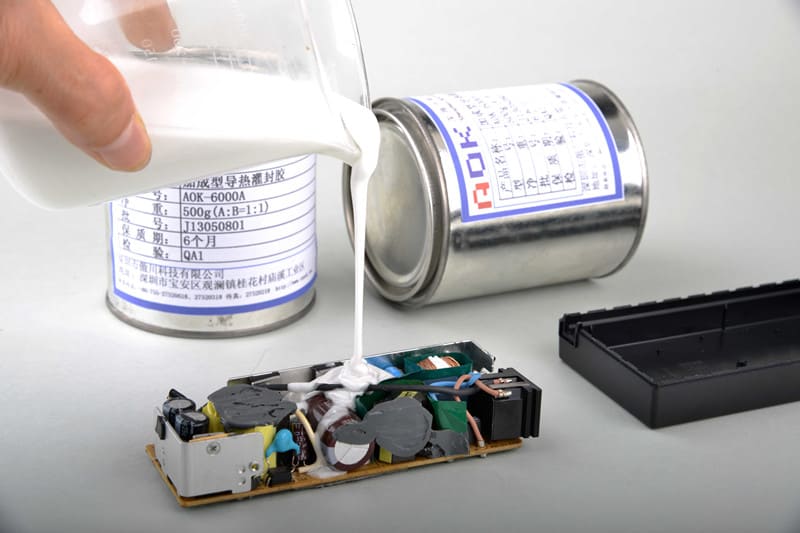 Epoxy potting encapsulant: mostly hard, but some soft. The biggest advantage is that it has good adhesion to hard materials, can not be opened after potting, high hardness, good insulation performance, ordinary temperature resistance is 100, and the temperature resistance of heating and curing is about 150 degrees. Reworkability is not good.

Silicone silicone potting encapsulant: after curing, it is mostly soft, poor adhesion, high and low temperature resistance, and can be used at 200 degrees for a long time. The heating curing type has higher temperature resistance, better insulation than epoxy resin, and can withstand pressure Above 10000V, moderate price, good repairability. Because it has good resistance to high and low temperature, it can withstand the cold and heat changes between -60℃～200℃ without cracking and maintain elasticity. It has better thermal conductivity after filling and modifying with thermal conductive material. Effectively improve the heat dissipation capacity and moisture-proof performance of electronic components, and the electronic potting encapsulant made of silicone material is soft after curing, which is convenient for the maintenance of electronic equipment. The color of silicone potting compound can generally be adjusted as needed. Or transparent or opaque or colored. Silicone encapsulants perform very well in terms of shock resistance, high and low temperature resistance, and anti-aging properties.

The main reference indicators of these three potting encapsulant are compared as follows:


< Previous one Back Next one >